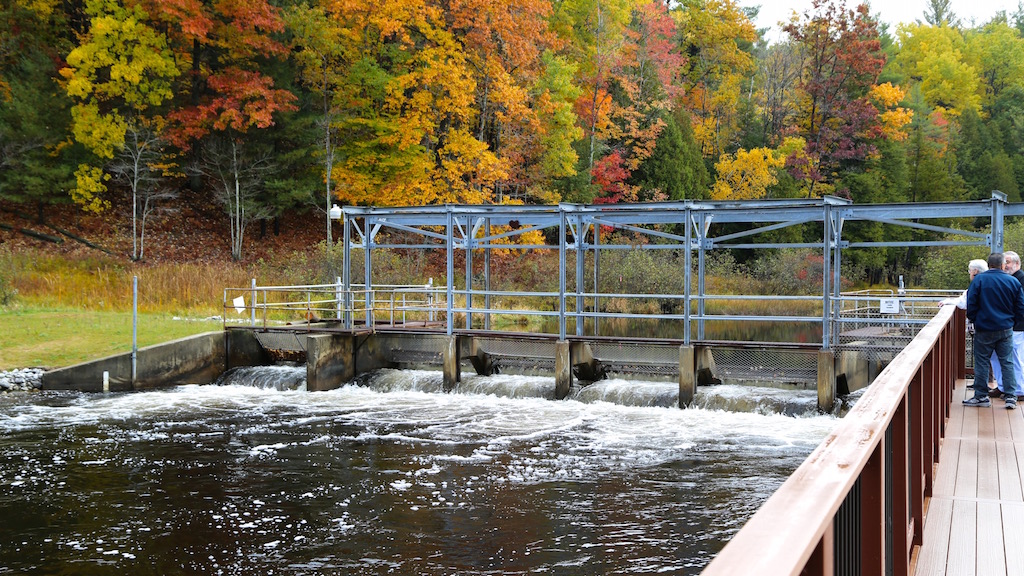 Steelhead egg take occurs each spring and supports stocking in rivers all across Michigan and in parts of Ohio and Indiana. However, steelhead are not planted in the Little Manistee. In a remarkable testament to the powers of the “Mother” River, the majority of the steelhead returning to the weir each year are wild fish naturally produced from the gravel riffles and cold water of the Little Manistee River.

In the fall, over 1,000 Chinook salmon can be harvested at the Little Manistee River weir as part of the annual egg-take process. In recent years, anglers have reported great success during the summer run of wild Chinook and have also enjoyed fishing for wild Coho salmon in late fall.

Grant funding has been secured to build the first phase of a Fisheries and Stewardship Center at the site of the Little Manistee River Weir, to help everyone who visits the site understand the importance of what happens there. As with all Explore the Shores sites, the infrastructure that will be built will be universally accessible. The site will also include an interpretive and educational trail, a viewing platform directly below the weir, a restroom facility, canoe and kayak launching facilities, and the design concept for future phases includes pathways to provide universal access to recreation and fishing opportunities, paved parking facilities with designated handicapped spots, an interpretive and educational gazebo and a below-ground viewing chamber where people will be able to see the migration of trout and salmon. Wayfinding signage will also be expanded to help visitors find the weir.

Fishing Restrictions:
Because of the weir operation and the need to protect the wild population of steelhead, the DNR has placed restrictions on fishing on the Little Manistee. Refer to current DNR Fishing Regulations at www.michigan.gov/dnr.

Universal Access:
Fish Found Here:
Map/Location to  the Little Manistee River Weir
Location: From U.S. 31, turn east onto Stronach Road and follow to the base of the hill across from Packaging Corporation of America and turn south to continue to Stronach Road around Manistee Lake, Turn east on Old Stronach
Categories: ETS Sites   Parks